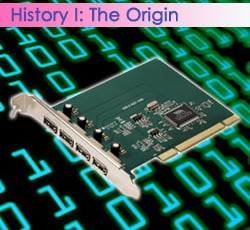 What are USBs? When were they developed? When did they start being used in the mainstream? These are all questions I hope to answer with this blog post as we explore the beginning of the USB and its development from the mid-1990s to the early 2000s. It’s often hard to imagine a computer without USB ports in this day and age, it’s become such a standard that it’s almost expected of a computer to support USB access. However, this was not commonplace until the mid-nineties to early two-thousands. USBs have evolved to give hundred of applications, most popularly, Promotional USB Memory Sticks.

It’s not unknown that the evolution of USBs (Or Universal Serial Bus) has progressed a lot over the last decade or two. USBs have predominantly become known for their function as a portable storage device, however, this wasn’t the original intention, in fact, the USB was simply a means of making the plethora of wires that connect to the rear of a computer easier to manage, giving a more universal means of connecting such devices such as mice and keyboards. The aim was also to enable these devices to transmit information faster. This, however, has meant that the USB has become a universal, utilizable device for not just the peripherals it was intended to be used for. USB has evolved to give us webcams, desktop novelties, compatibility with phones, and most importantly, the portable USB Drive, with Promotional USB Memory Sticks steadily becoming an essential advertisement tool.

The development of the USB started in the mid-1990s and was a group venture between companies such as Compaq, IBM, Microsoft, and Intel. All of these companies had one goal in mind: to produce a simple, universal solution and standard for personal computer peripheral connectivity. Several beta stages were released, starting from USB 0.7 and upward were released to the public gradually evolving into the USB 1.0. USB 1.0 was, however, not without its issues, being a mere shadow of the latest USB technology, unable to support several higher powered connections, such as computer monitors, and was unable to split into multiple connections, the speed also ranged from 1.5 to 12 megabits at the most, compare this to the latest 3.0 technology, which can run at rates of around 5 Gigabits per second.

Computers with compatible ports were first released from around 1995 onward becoming commonplace by around the 2000s. After almost 7 years of development, the first USB access was added to computers and has rarely been absent since. It wasn’t until 2004 that the popularity of the USB Mass Storage (Memory Stick) was popularized enough that most computers were designed to recognize them as such to give them almost seamless compatibility.

Flash forward and USB port devices make for one of the most popular pieces of technology for computing, selling upward of 2 billion units per year for various different peripherals. Most recently Promotional USB Memory Sticks have been a must-have for any advertising campaign, giving the freedom to convey large amounts of information to customers in a form that is small, universally computer compatible, and portable.