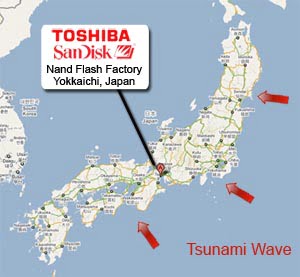 So it has been 6 days since the 10 meter tsunami wave came crashing down on the eastern coast of Japan, causing billons of yen in damage and leaving a devastating array of destruction.

Hundreds of houses and cars were destroyed and businesses were either closed due to power failure or had been totally destroyed by the effects of the tsunami. Two USB flash chip manufacturers who have a joint venture factory based in Yokkaichi, Mie Prefecture, Japan is Toshiba and SanDisk.

The Toshiba and SanDisk factory produces over 30% – 40% of the worlds flash chips. These chips are what are used to make our company logo printed USB flash drives, prices of which have seen a recent steep uptrend in price.

Not only has the Toshiba and SanDisk factory closed for an unspecified amount of time but also a vast amount of semiconductors plants have also closed.

The share price of the major chip manufacturers has been very volatile since the Japanese tsunami; Toshiba Corp. (TOSBF.PK) is down 2 points from 6 to 4 since the factories closure -33%

Still, no change in the price adjustment mentioned in yesterday’s blog, however, we receive a lot of Chinese USB factory manufacture spam, and it looks like our price increase quoted yesterday are the lowest inflated prices. One factory was quoting an extra $2.50 per chip price increase for a 1GB Flash drive… Looks like some people are trying to capitalize on the Japanese situation.

Our thoughts are with the people of Japan and wish them all the best.