Modern gadgetry is power-hungry, and our increasingly busy lifestyles mean that a dead battery can leave us completely detached from our personal, work, and daily schedules. Portable chargers and branded power banks are ideal for keeping your mobile devices topped up while you’re out and about.

However, as with all electronic devices, it’s essential to treat them with care and respect to ensure they continue to work effectively and above all, safely.

Purchase from a Reputable Source

Eleven of the power banks had adapters that failed electrical safety tests, with nine failing the probe test, which involves pushing two differently sized probes into the plug holes to assess whether it would be possible for someone to receive an electric shock.

Six of the eleven power banks were poorly constructed, and five came with no internal thermal protection, which monitors the temperature during charging. One stopped working after a short-circuit test, and another was damaged during the overcharging test.

One of the power banks was so poorly put together that it started to smoke and melt during charging. 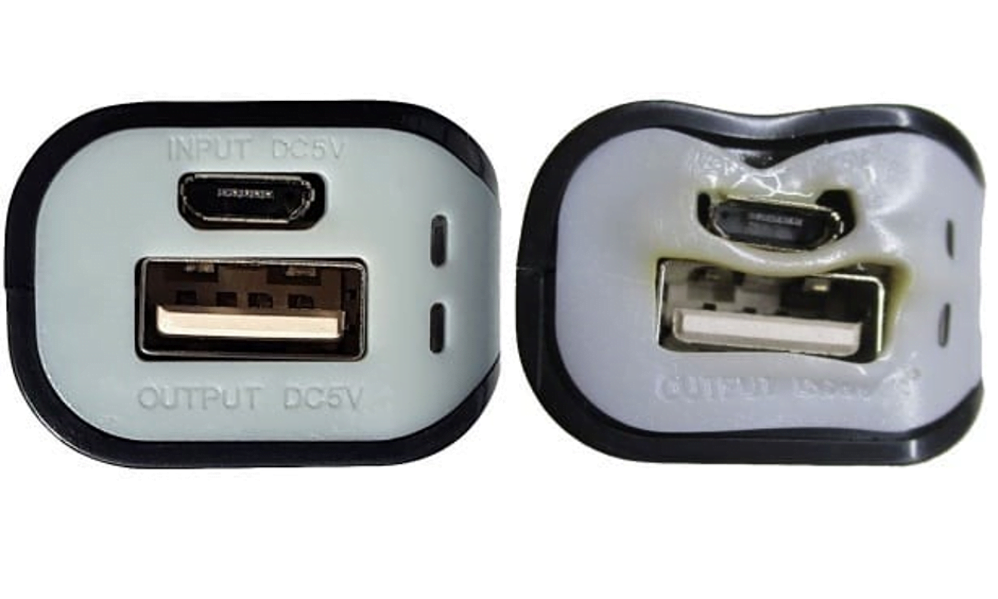 Image Courtesy of Which?

Although all of these power banks were purchased from Amazon Marketplace, AliExpress, eBay and Wish, the products themselves were from unknown manufacturers.

This presents a big problem for someone looking to purchase a power bank. It just shows how difficult it can be to buy one that isn’t cheap and poorly made. In China, all power banks are only allowed on planes within carry-on luggage and not check-in luggage due to the volume of shoddy products and the potential fire hazard associated with them.

There is only one way that you can find a decent power bank that isn’t a safety hazard, and that is by doing your research and undertaking the following:

Product reviews are your best bet when looking for a quality device. If a product or company has no reviews, then it’s better to be safe than sorry and avoid it altogether. That’s not to say that it is automatically a bad product, but there is no way for you to tell if it is or isn’t.

Researching the company that manufactures the power bank will give you an idea if it’s worth buying or not. If a company is based in a country such as the US, Europe, Australia or Japan, they will be under strict laws as to how they produce their products. Therefore they have measures in place – such as Japan’s Electrical Appliances and Materials Safety Act – which protect consumers.

As we’ve mentioned, countries such as China, aren’t so strict with power bank production, which is why you should avoid purchases from underregulated countries.

It’s also important not to buy the cheapest product you can find. The most economical can often mean that the power bank is poorly made and ineffective, or worse dangerous.

Use Your Power Bank Properly 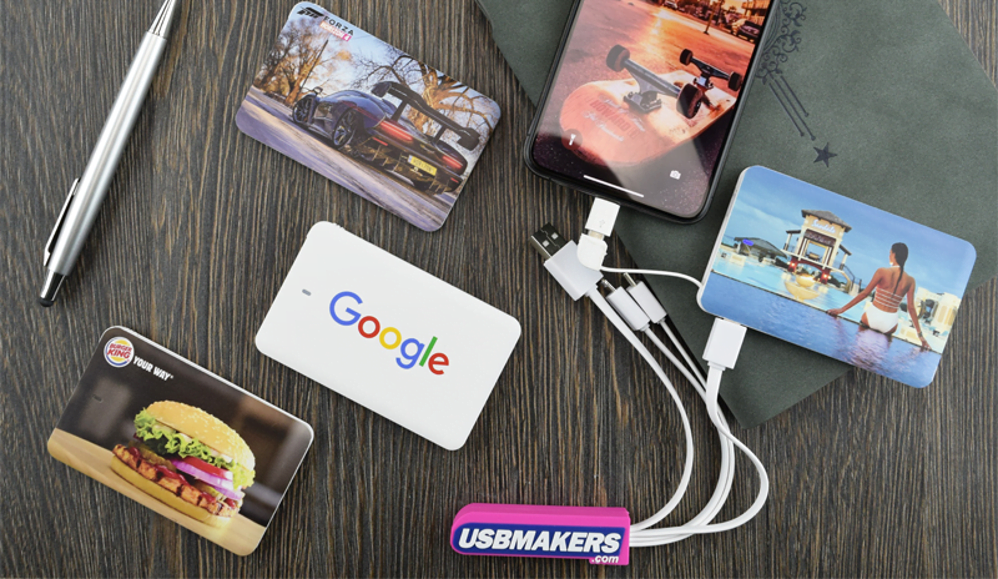 This may sound like an obvious point, but many consumers aren’t fully aware of how a power bank works.

For example, charging your mobile at 2.1 Amps means that it will charge really quickly, which sounds great in principle, but it can be dangerous since most phones are designed to only charge at 1.5 Amps. This means that the electronics within the phone will wear out quickly, damaging your phone.

Understanding which devices are designed for each port means that neither your device nor power bank will get damaged.

Any reputable power bank company, such as USB Makers, recommends that you use the USB cable that comes with your device. This is because many third-party USB cables are cheaply made, which means they come with a whole host of efficiency and safety concerns.

Power banks, like any electronic device, will heat up and extreme temperatures are a killer for electronic devices, which is why it’s essential to keep your power bank cool. Just like phones, laptops, and tablets, power banks have circuits within them that control the flow of electricity in and out of the device. If these become damaged, there’s always the chance that an excessive discharge of electricity could lead to an electrical fire.

Of all the explosions and fires from power banks that you see in the media, most are hot before they catch fire or explode. Most of the high-quality power banks on the market will shut down if they get too hot, but if you’ve damaged the internal components by letting the device heat up too much or you’ve purchased a subpar product, then it might be that the components aren’t able to function correctly.

You can keep your power bank cool in the following ways:

If you find that your power bank is starting to overheat, then stop using it and place it in a cool, well-ventilated area, and don’t use it again until it’s completely cooled down.

Don’t Get Your Power Bank Wet

Power banks and water do not work well together. If power banks get wet, there’s a chance they can short-circuit, which can cause damage to other electronics that you plug into them or even cause an electric shock in some extreme circumstances.

Ensure that you keep your power bank dry at all times. This means ensuring that it is kept covered from the rain and keeping it out of your pocket during warm days to prevent moisture from your body from making it wet.

If for some reason your power bank does end up getting wet, there are a few things you should do:

The absolutely vital thing to remember is that your power bank should not be used if it is still wet, as this can cause serious harm to yourself and any device you plug into it.

Power banks can become damaged if you leave them charging for too long since it can cause damage to the battery. Of course, this doesn’t mean that your device will catch fire if you charge them for a little longer than you should. What it does mean though, is that consistent overcharging will decrease the efficiency of the battery before too long.

If you’re charging your power bank for too long regularly, then the power bank becomes less effective.

To prevent overcharging, it’s essential to keep an eye on the charge from time to time. Most power banks will have some kind of light or display which will tell you if the battery is fully charged.

These days, newer power banks from top suppliers are made with electrical security measures. These measures will progressively lower the voltage the closer the device gets to full charge – this is the same technology that newer mobile phones use too.

If you’re worried about overcharging then investing in a newer bank could be a good choice for you, otherwise, remember to unplug your device once it’s at capacity.

Use Your Power Bank Regularly

Not using your power bank for long stretches can cause damage to the internal components of the power bank.

If you don’t use your power bank, it can severely reduce the capacity of your device. The longer it sits not being used, the more electricity will leak out of it. All electrical devices do this, but some will leak more electricity than others if they aren’t built properly.

If your power bank has no power in the battery, it will begin to oxidise and cause gradual internal damage. It’s similar to an air conditioning unit, which needs to be flushed every so often to keep it working effectively. A power bank requires a ‘flush’ of electricity in and out from time to time to ensure that it can operate at its best.

All you need to do is charge the device regularly and then use it on a couple of devices every so often.

Be Careful How Your Store Your Power Bank

For most of us who use a power bank, it’s an everyday part of life, but some of us may only use it a few times a year on days out or while on holiday. When it’s not in use, it’s vital to ensure that you’re storing your power bank properly, so it’s ready to go when you need it.

Power banks need to be stored in a cool, dry environment, that isn’t prone to extremes in temperature. You should also make sure your power bank is charged to around 50% capacity before its placed in storage. This is because your device will leak electricity over time, as we’ve already covered. Keeping some power in it means that, although it will still continue to leak, it will take a little while before it gets to the point where it will cause any damage.

Stay Away from Modification

There are numerous videos and tutorials out there which involve modifying or ‘upgrading’ your power bank yourself. This is certainly not recommended, and any good manufacturer or distributor will tell you the same.

Power banks are manufactured and tested in the form that you buy them in and are not designed to be tampered with. We tend to think that small electronics aren’t capable of causing anyone any harm, but as we’ve already explained, faulty power banks are capable of setting alight or exploding.

Power banks are capable of holding several amps within their circuitry when fully charged, which means if this were to discharge all at once, it can deliver a pretty nasty electric shock if you don’t know what you’re doing.

Look Out for Leaking Power Cells

If you’ve ever seen an alkaline battery after an acid leak, then you’ll know roughly what to look for.

Most power banks use rechargeable lithium polymer or ion batteries, which can be very harmful if you’re exposed to them. If your power bank cells do begin leaking, it’s important to be very careful. Avoid making contact with your eyes and hands and ensure you’re using the right hand and eye protection during clean-up.

If you can, try to discharge the battery completely, but don’t plug it into anything if it’s leaking. It’s important to dispose of it in the correct way. However, each region has different regulations in regards to disposal, as it’s considered a hazardous waste product. So, ensure you research your options thoroughly before doing anything.

Power banks are fantastically useful devices that help immensely with day-to-day life. But just like any powerful electronic device, they can be dangerous in certain situations.

Purchasing from unknown brands for peanuts can mean that you’re purchasing something that could be quite dangerous. Similarly, if your power bank gets wet or you don’t store it away correctly, it could cause damage to yourself and the devices you plug into it.

It’s also important that you avoid modifying your device since it can cause damage to the power bank and could give you an electric shock if you don’t know what you’re doing.

If you’re looking for further information on anything we’ve covered in this piece, then don’t hesitate to contact us today.