The Life of a Twister USB Flash Drive 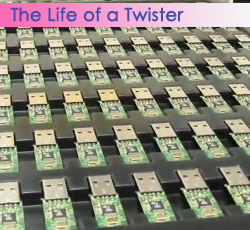 It is often a misconception that all Twister USB Flash Drives are sourced and manufactured by a single company or companies, when in fact this couldn’t be further from the truth, it is for this reason that plastic, chip, and metal quality will vary from USB provider to USB provider, and whilst these factors may not seem of great significance, as I will explore below, these factors can greatly impact the quality and longevity of your USB project. To compare, this could be compared to other industries such as the film industry or the game industry. For example, different film or game studios may have the chance to create a different version of the same story. However, not all studios have the same hands working on it or the same production values. Each time something is handled by a different team, the output is inevitably different.

Sourcing Chips
Nand type Flash Memory Chips are manufactured by Toshiba SanDisk Japan, in three major factories. It is these chips that are used to create USB Memory Sticks. These chips are subsequently bought up by various Flash Traders. The price of Flash Memory fluctuates in price based on a supply and demand basis, not unlike a commodity. Flash Chips are obtained through Flash Traders by USB Makers to create your USBs. USB Makers only purchase what is referred to as ‘A Grade’ Flash Memory. Failing to source adequate memory could cause your Twister USB Flash Drives to potentially corrupt your data and fail.

What is ‘A Grade’ Flash Memory?
Something not many people are aware of is that there are varying grades of memory, all manufactured by the same company, the grade of the flash is based entirely on how well functioning the flash is after it is tested at the factory, being labelled from A Grade to C Grade. There are also two commonly recognized counterfeit grades, Counterfeit Flash and Masked Flash. These two inferior grades can be found floating around from more unsavoury sources. Counterfeit flash will have severely lower performance than the industry standard and could corrupt data or fail quickly, risking your valuable files. Masked Flash will display a different capacity than it actually is, for example, an 8Gb Flash Drive may appear as a 16Gb Flash Drive. After the 8Gb has been used, however, the drive will not simply cut out as being full but will proceed to delete older files that are currently on the drive.

Shell Sourcing & Assembly
Shell providers are the second port of call when creating your Twister USB Flash Drives. Shells are sourced from a shell factory, USB Makers always aim to source the best quality for the best price. If you are opting for a Pantone-matched shell or a completely custom PVC, this is where your bespoke shell will be moulded. Our factory then assembles the Memory Chip and the Shell and print them with your choice of logo.

USB Makers aims to have as competitive pricing as possible and will endeavour to price match or beat the same spec wherever possible, however, if you have obtained multiple quotes from other industry leaders, and a company comes in significantly cheaper (I.E. lower than the production cost of the drive) It may be that this is due to using of Masked or Counterfeit Flash Chips, or inferior shell quality.